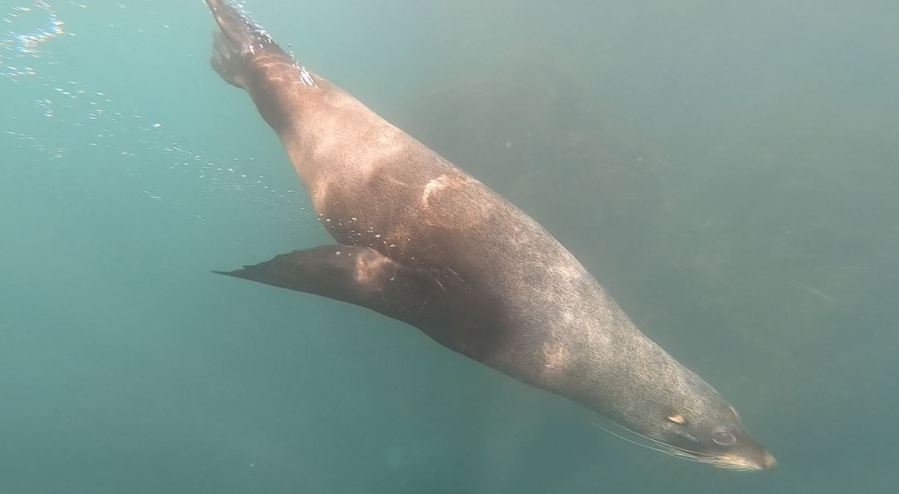 It’s the final day of our trip. Tonight we will be sleeping in our own bed again with our 2 dogs snuggled up next to us in the blankets. But it’s not over yet! We have one more activity planned that I am feeling incredibly excited about (and slightly nervous)

We pack up the bike one last time and take the inland route, heading to Kaikoura. We arrive a couple of hours early so we pass the time with coffee, lunch and a walk on the beach.

And then, it’s time for our seal swim! Last year we did a dolphin swim but unfortunately we only saw Hectors Dolphins (which was amazing) but they are protected and you’re not allowed to swim with them. That’s just how it is with wild animal encounters though. It’s never guaranteed, but when it does happen, it’s pretty special.

When I told Daniel I had booked us in to go swimming with seals, he wasn’t impressed. He said, ‘aren’t they super aggressive and don’t they bite? And I don’t want to get wet and cold. I’m not looking forward to this.’

I have grown up knowing that seals can be pretty aggressive and that you should never approach them. But that is on land. On land they pretty immobile, I have always thought they look pretty awkward. Their immobility on land makes them very vulnerable, which is why they can be so aggressive, especially if you get between them and the water.

But in the sea, you are in their world. They are fast and agile and not at all aggressive toward people (so we are told.) They could out swim us in a second if they wanted to so we are no threat.

Today we are joining Seal Swim Kaikoura for this experience. Like most of our tours on this trip, we are the only people. We have definitely witnessed the impact Covid has had on our tourism industry. I hope the industry can re-emerge stronger and even better when our boarders eventually open. New Zealand has so much to offer the world!

We have our safety briefing and get kitted up in all the gear, including a wet suit hood in thick neopreme. It’s all so snug and hard to get on but no doubt will keep us really warm. (Daniel will be pleased) We are also given a mask, snorkel and flippers. They even had prescription masks for Daniel to use which was amazing. I had never really considered his limited visibility without his glasses.

We waddle in all our gear out to the van and take a short drive down to the jetty while Vanessa shares some history of the New Zealand fur seals with us. These seals have very thick, warm fur, which means when settlers arrived, they were heavily hunted. Before being hunted, there were said to be around 1-2 million, but nearly became extinct. Fortunately they became protected in the mid 1900’s and today, the NZ population is around 100-300k. I had no idea they had been hunted so fiercely. I have seen seals in many place in Aotearoa and had never considered them an animal that had been endangered.

We get onto the boat and head out into the ocean. There is a bit of a swell and the boat bumps up and down a bit on the waves. I am the first to spot seals. Two of them. We watch them for a while to see if they are feeding or chilling. They look pretty relaxed, fins flapping about, rolling around in the water. But they are in open water so we move on. Our guide wants to try some other spots to see if we can find some that are closer to the rocks.

Seals spend a lot of their time out in deep water, fishing and feeding. They will stay out there for ages until they are completely exhausted, then they come back to the rocks to rest. Because of their thick fur, they overheat easily so will pop back in and out of the water to cool off on sunny days. Today is cool and overcast so the seals are hanging out on the rocks more than they normally would. We are told we need patience and persistence on this tour.

After visiting a few spots, we find an area that is reasonably sheltered with good visibility in the water, seals on the rocks and one in the water. Perfect. We slip into the water quickly and as quietly as we can, although in all that neoprene I still make a bit of a splash.

We swim out slowly towards the seal, I put my head under, and, AMAZING!

I am looking right at this seal in front of me. What an incredible experience. Another seal gets into the water, then another and at one point there are 4 in the water with us. We spend a lot of time watching each other, checking each other out, the seals getting comfortable with our presence. Then they begin getting curious and swim closer and closer (We are told not to swim closer than 1 meter to them, but if they swim up to you that’s fine) I have the most amazing experience, looking at a seal that is so close and we just hang out in the water, staring at each other for ages. It has such big beautiful eyes and its fur is so sleek. They are such graceful, playful, agile creatures underwater. Nothing like the awkward blobs that sit on land. The ocean is their territory and the own it!

Our guide is floating close by, watching and telling us where to look. A couple of times he calls out, ‘to your left’. I turn my head and there is a seal right there, so incredibly close. A couple of times they swim right under me. I do get slightly nervous at one stage, hoping the don’t decide to have a little nibble on me (after all, they are wild animals), but they are just curious. We spend ages in the water with them, it’s such an unreal experience.

After about an hour in the water, it’s time to head back. I have loved every minute of this, witnessing these beautiful creatures in their natural environment. I awkwardly climb back onto the boat, thinking about what a special experience this has been and then look up to see a pod of dolphins in the distance. What a fantastic trip!

And Daniel, he absolutely loved it.

We make it to Picton and board our ferry. We are in the Plus Lounge again. Now we have discovered it, it’s the only way to travel! We are on an evening ferry so I decide to pop out for a bit and watch the sunset. Even in the open water of the Cook Straight, the water is so flat. I have never seen it like this before, it’s a perfect crossing.

The South Island is a layer of silhouettes. The setting sun has blushed the sky pink with golden highlights that spill out into yellow and indigo water colours behind a dark marbled sky.

2 thoughts on “Swimming with Seals”

Enter a key word to search for your next adventure

I had a lovely relaxing stay in Otaki at the end of last year. Check out my blog to read about things to do in this lovely place.
First time exploring Bason Botanic Gardens in whanganui. Beautiful place for a walk.
Had a great trip to Auckland a couple of weeks ago. We stayed at Imagine Beach Road which only opened 6 months ago. Great place to stay in a central location. Perfect for exploring the city and going to concerts at Spark Arena. We saw Billie Eilish.
Home made gelato. I think this one is my favourite yet. Reminds me of the stracciatella gelato I had in a hill top town in Tuscany. Yum.
It was such a privilege to see these beautiful Hectors dolphins in the wild. Thank you @akaroadolphins for such an awesome tour!
Watching the morning arrive a few weeks ago in Akaroa. Getting up early to see the changing light was so rewarding. The day was so new and quiet.